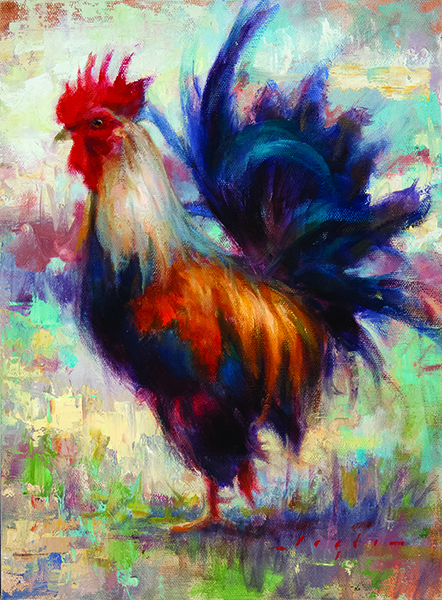 Tumalo Art Co. presents artworks created during the “Artists in Action” event held two Thursday mornings a month in July, August and September. Artists demonstrated their techniques to the delight of passersby and friends of the gallery who came to the Old Mill District specifically to see the artists work, both inside and directly outside the gallery as well as painting plein air near the Deschutes River. The group show will open during the First Friday Gallery Walk October 5 from 4-8pm and it will continue through October.

Helen Brown demonstrated her watercolor batik process several times and made a series of paintings of Queen Anne’s Lace. They are all on view in the group show. And, David Kinker, who works extensively on site painting plein air, has several paintings from his time by the river trail depicting local Old Mill District scenes, including the one above of the pedestrian bridge. Marty Stewart painted in the shade by the Deschutes River and created two plein air paintings with her airy, atmospheric quality. “Deschutes July Morning” is one of them. Katherine Taylor created “Old Stink Eye” while painting in oils outside Tumalo Art Co. on a warm summer morning in August. She likes to paint outside to interact with people walking by and works on a subject with lots of color and strong shapes so the art can be seen from far away. Come and see the goat and the rooster she painted during the events as well. Shelli Walters tried her hand at creating her mixed media paintings plein air by the river trail and also demonstrated in the gallery. “Stella” is one of the birds that came to life during that time.

This is just a small preview of the art in the show so come by in October to see it all!

The result of our time spent painting inside and outside Tumalo Art Co. and further afield in the Old Mill District, was a renewed energy. Painting outside of our normal habitat (our studios) loosens the art up and brings new insights. We loved interacting with you and each other—sharing the joy of painting on a gorgeous summer or fall day. We will be doing it again next Summer, so stay tuned!