January— Where in the World, Group show held over from December

June—“Journeys in Nature”, Sarah B Hansen

February—JOY! a group show dovetailing with the community-wide Joy campaign. Take part in our interactive display outside the gallery—tell us what brings you JOY. Open to everyone!

December—“Seasons Squared” Group show of 12 x 12 artwork, and Give Art!Tiny, custom, one-of-a-kind for everyone on you list

January—“Summer in Winter” December Group Show is held over

March—Helen Brown, “From the Mountains to the Sea”

August—Katherine Taylor—A Celebration of Paint!
Outfitting an array of canvases with lively textured marks made from lots of oil paint lusciousness.

October—Artists in Action—art from the event July, August and September

March Group Show—Outside Our Box: An Opportunity for our artists to embrace & explore new eas, materials, techniques and shake up their palette, perspective, approach or subject.

May Show—Nancy Becker, “Portraits of the River”

September—Carla Spence, Between Here and There: Closing the Divide with Color

October—Marty Stewart, The Poetry of Painting

April—Art About the Earth (group show)

February—PASSIONATE CREATIONS—A group show entitled “Passionate Creations” will open February 3 from 5-9pm, during the First Friday Gallery WalkFor the month of love artists have made art about the things they are most passionate about—a subject, an artistic medium, the way light falls on the landscape—whatever moves them to create. In all mediums, from paintings, to photography to ceramics to glass and more

May—Retrospective 10-Year Anniversary Show
All artists who have shown with TAC in the past 10 years are invited for a very special Group Show!
June—Annie Ferder—watercolor / Nancy Becker—hand-blown glass

August—Janice Druian/ Vicki Shuck
AN UNCOMMON BEAUTY—Paintings of the People and the Land East of the Cascades, opens Friday August 3, from 5-9pm at Tumalo Art Co. Vicki Shuck and Janice Druian have partnered on a project to document through paintings, the rural way of life on ranches, farms and in small towns east of the Cascades. The goal of the project has been to portray the people and communities of rural Oregon as they are today to further the understanding of the beauty and the challenges of rural life.
Artist Demo—August 5 . Vicki will demo from noon-2:30pm; Janice will demo 2:30-4pm

Dorothy Freudenberg takes her photography into new worlds using digital media to create her inner vision of the season. “Autumns shift asks us to release any burdens we’ve been carrying, in the same ways the trees release their leaves into the wind”, explains Dorothy. Her layered landscapes, in rich colors, capture this process of change and release.

Just finishing a summer of river guiding, David Kinker has been immersed in the beauty of rivers and canyons. According to David, “the reflection and rhythms of the river are inspirational to me. They have a language that is authentic and healing to us all—metaphor and symbols abound.” His new paintings embody this inspiration.

Nov—Marty Stewart—soft pastel / Helen Brown—watercolor—In Tumalo Art Co.’s November show “Earthly Delights”, Helen Brown and Marty Stewart show scenes from nature that delight the eye and also move the viewer to interpret these scenes as precious earthly assets we all need to protect. The show opens during the First Friday Gallery Walk Nov., 2 from 5-9pm.
Helen Brown’s current work is a form of batik in watercolor. She draws her images on Ginwashi rice paper, begins with a light, colorful wash of watercolor, and then protects the lightest areas by painting them with molten wax. The wax resists all subsequent layers of paint. After about 6-8 layers of painting followed by more wax, she irons out the wax leaving only a watercolor image on paper. The subjects in her November show range from mountain scenes in Central Oregon and Glacier National Park to her more familiar tree scenes.
From deep colorful canyons and vast meadows of flowers to trees and gentle creatures, Marty Stewart’s new work gives the viewer a rich assortment of scenes to enjoy. “Animals and birds proved to be nice additions to my usual landscapes.”, says Stewart. For Marty, painting has become a way to look deeply into the nature of things, whether landscape, figures, animals or abstract images, to see what can be learned there and shared.  She often paints en plein aire in Central Oregon or on extended camping trips throughout the West with her husband. 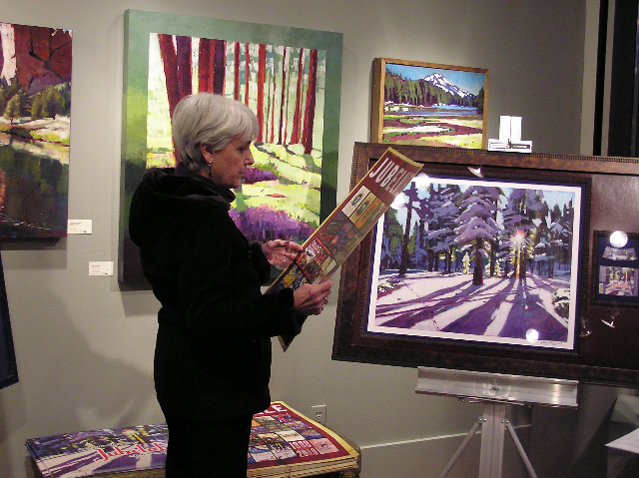